I think i'm coming down with the flu (Or some other bug), so since I can't broadcast, I'll just have to settle for a good old fashion blog post.


So you want something serious? Here goes. Why am I so surprised that a society made up of mostly conformists would have no problem with being monitored by unseen agencies with little to no oversight who seek to extend the range of its intrusion through the very secrecy they deny the citizens who put them in those positions of power and security in the first place?

Because I expected Type 1 sooner rather than later. Sigh.

I'm starting to realize that governments seemed to be either created or mostly used for the suppression of our attempt to reach a Type I planetary status. For those who aren't aware of what that means, see wikipedia or my 3rd album.

Speaking of albums, I wrote my first dedicated song for Omniverse : Type 3 : Aum niverse. It's called "Interdimensional Council of Greys" and I fucking love it. I can't wait to let you all hear it. Writing it was so easy when I was finished I still felt like I should keep writing to it. Type 3 will have 30+ songs and will be 3 discs. Or come in 3 parts. I havent decided yet. People who follow me on reddit will get exclusive preview material so don't be that guy (or sexy gal) that misses out on the dopeness.


Completely random. I started doing one of those video exercise training programs; (T25 since you asked) aaannnnnddd I am official old. Maybe not old, but definitely not young anymore. But to be honest, those video training regimens are pretty awesome. It's got very little to do with age and more to do with overall conditioning and discipline. I hadn't felt that good in a long time and I'm fairly active.

For the first time in my music career I have a real studio desk. Man I love it. Every slot, has a purpose and there's more desk space than i've ever had. My chessboard from Canada functions as my mousepad. 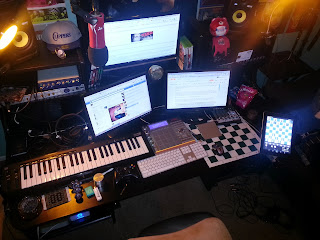 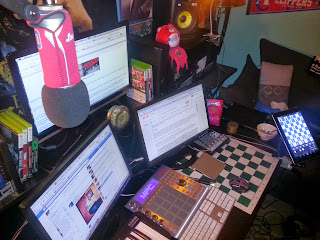 Here's my opinion on the Duck Dynasty controversy.


Anyway, as the New Year approaches expect me to start releasing information about show locations and performances. Remember, if you can get 10 of your friends to come out to a Greydon Square show and there's 5 people who can do that, then we can do a show anywhere in the country.

I plan on definitely performing in these locations in 2014:

If I don't hear from you or see you until after the New Year, be safe! Have a happy and healthy New Year. Do something fun, that's an order!