Yea, so I had no idea what that song was about. Even worse, after seeing the video I'm even MORE confused about it now than before I started.

Hope you guys are having a fantastic new year. The residents of Colorado are having an especially great time seeing as how they are finally being treated like adults. You see, Colorado became the first state in America to fully decriminalize and regulate the sale of marijuana. The state is even taxing it at an insane rate. Now, like I said on my podcast this past week, the media has been entertaining at covering the entire ordeal. From hosts acting like it was the end of American civilization, to anchors challenging prohibition outright, the response has been for the most part balanced. Fox news try to demonize it, other than them though, every one else seemed to be pretty reasonable. So this looks like the beginning of the end. Of marijuana prohibition. And that will probably be limited too, seeing as how Kentucky and Arkansas would be the last legalize. Either way, the cat's out the bag. We know now. Weed isn't going to bring down society, but that was never really a possibility. I think what those who were against it were so afraid of, is the perspective altering effect this would have on a larger scale. Not only would people NOT support blindly invading countries on sketchy and misrepresented premises, but they would also realize pretty quickly, that once again the government's official position to keep marijuana as a schedule 1 class narcotic is and always was complete bullshit not intended to do anything but tag political distention and use petty laws to target the poor and disenfranchised.

"There are an infinite amount of numbers between 0 and 1." - Scott Evans


So I woke up to this yesterday: 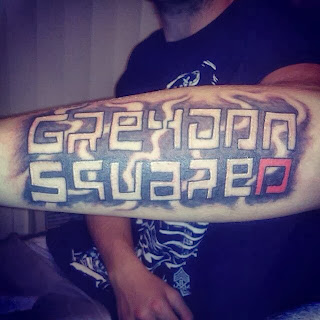 Yes I have crazy fans. Not crazy in a bad way, but damn I remember when i would hesitate to call them fans. I thought it was disrespectful or something. Now, fan is the ultimate respect. When someone says they are a fan of mine today, I don't cringe in my heart like I used to. Ok, back to the tattoo. This was pretty shocking. Amazing. Dope. Sick. Rubber helmet. I've run out of words to describe my surprise.

Captain Grey of the UFAE Carl Sagan
Posted by Greydon Square at 3:33 AM