Big "mainstream" things in the works...

If you could call it that. Actually I'll be honest, you could. You can. You will. I can't say too much at present, but one of the biggest opportunities I've ever been presented with has a good likelihood of passing true provided there are no major issues with funding. And from the network involved, I don't think funding will be an issue. I wish I could say more, but I'll have to wait until something more concrete develops to report.

A Unified Album
Myself, Tombstone da Deadman, and Sai Phi are just starting to work on the official GU album starting with a Unified Federation Star Citizen theme song. We figured instead of doing a Star Citizen themed album, we would just roll the Star Citizen songs we were working on over to the GU main album. There will be many familiar faces. From Syqnys, to Gifted Anomaly. Many familiar topics. From atheism to politics. I've always wanted to do a GU album, and I'm glad I didn't do one back then because I'm sure all of the references and material would have seemed extremely dated by now.

I took songs from GU artist all over spotify and threw them into one mass playlist. I'm going to create others as well. Other genres. Hell, I've already started my country western bluegrass playlist, so best believe others are coming. Why is this important? Because you can show people what your musical tastes are across genres. I love all different types of music. This is my ability to show them by creating playlists of different lengths and themes. I'll work on getting more GU artists Spotify, for now hopefully this playlist allows Spotify users have something a little official.

Call of Duty: Modern Warfare
A side note here, the new COD game is pretty legit. I really enjoy it. I haven't even thought about Battlefield since I got it. That's a bad sign for BF games at the moment. To me COD:MW is what BF should have been. Sure there's the occasional kill-streak you hate, but honestly if that's the worst of it, this is one of the best COD games I've ever played. Here's something that really insane, IT'S CROSS COMPATIBLE! Like, shit! That's hella dope. So now I get to play against people across consoles. From Xbox, to PlayStation. It's actually works quite well. Keyboard and mouse people are separated from gamepad users, and those who don't wish to participle in cross-platform gaming can just turn it off while still being able to choose between mouse/keyboard and gamepad. It's pretty sick.

If you want to game with me on there, my gamer tag to add me is

Progress is being made on issue #0. We needed to add a couple of pages in order to fit more of the story in, but it wont be an issue. I would think that we'd have something ready for you guys right before summer. At least that's the plan. The album? We don't plan on releasing the E&E album without the comic issue 0 being finished, so once that's finished, or near completed, you'll see us move into the mixing and mastering stages of the E&E album. 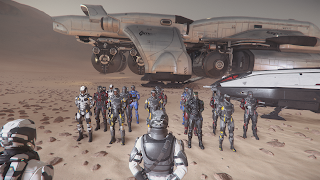 Unified Federation
More great things developing in the Unified Federation Star Citizen Exploration Fleet. We've finally started to round out as a crew. We've a got a full security department with an extremely competent Chief of Security. We've got an engineering department that's coming into it's own and a tactical bridge crew that's second to none. I'm not just blowing smoke either. In the past 2 weeks my guys once engaged in THREE simultaneous missions involving ship to ship combat operations, FPS CQC bunker clearing tasks on a completely different planet, while supporting a mining expedition headed by my engineering department on an adjacent moon. Literally doing these 3 missions at the same time. The following week, they simulated ground to ship boarding procedures successfully. These guys are the real deal and I'm extremely honored and privileged to lead this group in to the stars.

Star Trek
Star Trek alums had a pretty rough week. Rene Auberjoois famously known as Security Chief Odo on Deep Space Nine passed away last week along with the husband of Marina Sirtis. His name was Michael Lamper and he was apparently a guest actor on TNG when they met. I'm incredibly saddened to hear about both and my thoughts and condolences go out to each of their families.

Turns out we're getting a second season of Star Trek: Picard before we've even gotten a first one. I mean, seriously though, is there any doubt that this show is playing with house money? CBS would have to screw this up so monumentally bad in order to not get at least 5 seasons out of ST:P. I heard something about Michael Dorn turning down a role reprisal because the show-runners offered him too little salary. I hope this isn't true. This would be dumber than the OKC Thunder trading James Harden to the Rockets because they didn't want to "pay him". Pay the man! It's probably for one episode anyway, so why not pay him what he wants and give the fans what they want. If we're not going to get a Captain Worf show, then at least give us closure to the post DS9 Worf story line.

Our Discord Community
Trans-Intellectualism burns strong. Our discord is growing, and yet the temperament is still very upbeat and positive. I appreciate all of the interaction and activity within the server. I hope to also bring other GU members like Syqnys over to discord. So if you see him online, tell him to drop in and say what's up!

If you are interested in JOINING the GU discord
Click here
Be warned that it is heavily policed.

I want to wish everyone a happy Christmas Holiday, and an even greater New Year. I'll probably be back online around New Years eve, but if you're in the discord, I'm not hard to reach.

Posted by Greydon Square at 9:52 AM