It's interesting how much time passes in such a short observational period. See, I should have been kept this blog if for nothing else, as a log for my inner thoughts. 2020 is approaching. So many things have changed in the last 5 years. I wont go into specifics just yet, but I dealt with a great depressive period right around the time I released Compton Scattering. This blog wont be about that, but we will revisit those years between 2013 - 2019 in future blogs and podcasts.

Things are looking up. Today I'm working on a new album. Its called City on the Type of Forever. It will be the first of 4 albums based in the Iron Star Era known as Type 4. I wont lie to you, I'm not as far along on it as I'd like to be. Originally I planned on there being 64 songs on Type 4. After Omniverse however, I was burnt out. Imagining doing another 64 songs after just doing 30 was not even considerable. I changed the number to 10. My mind was fried. And to be honest, hip hop was changing.

Someone recently told me on a YouTube video of mine that they had been listening to me since they were in the 6th grade. He's now entering into his sophomore year of university. Back in 2012 when we all thought "Hope and Change" actually MEANT hope and change, I still hadn't quite "made it". Sure I was known in a small, niche community, but most people had no clue. Unfortunately for my visibility I actually preferred it this way. I liked NOT being known. Being able to say what I want without feeling like I couldn't walk outside, or get online was liberating. I had my 15 minutes of fame, trust me, it aint all that. Being famous is NOT actually what most creatives want. What we actually want, is the ability to be creative absent the pressure of external stressors.

I am now 38 years old. When I was coming up, my favorite emcees were already on the fringes of hip hop because of the anti intellectual nature of the culture at the time. NOW? LMAO

Don't even get me started.


So I had to accept that I would always be on that fringe, if not for content and subject matter, for style and delivery.

I can rap to anything. And I mean that. But sometimes it isn't about the actual "rap". Sometimes its about accessibility. For a long time, I had taken pride in being somewhat intellectually inaccessible to the average hip hop listener. I didn't want to be an easy listen. Intellectually, or emotionally. These days I've soften on that stance slightly. I can never NOT talk about science and technology. But what I can do is modernize the music to appeal to a more wider demographic without sacrificing quality of sound or content. What I can do is go back to the drawing board for new schemes and new stanzas to flip lyrically. What I can do is search high and low for the greatest thought provoking subjects and write entertaining songs about them. There's much cover and not nearly enough life to cover it in. 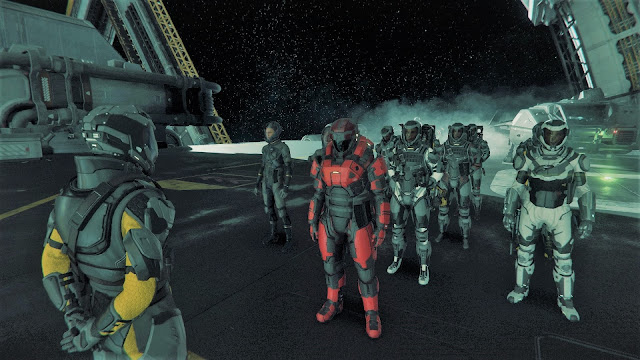 Oh shit. We did it gentlemen. We did it Tombstone! We did it Dabz! We actually built a digital space fleet complete with an efficient hierarchical command structure and a compartmentalized department focus from the ground up using nothing but pre-established science fiction lore and our wits! Think of us as Star Trek's Starfleet in a scarce dystopian hyper capitalistic 2050 galaxy complete with FTL travel and jump points. But don't don't listen to me, take it from this pretty commercial for the fleet's flagship "The Carrack":

That beautiful piece of engineering will henceforth known as The Unified Federation Starship Carl Sagan. A deep space exploration vessel. The command and control center for our fleet. Since 2013 I along with all of my other nerd and geek friends (Sai Phi I'm looking at you! lol) waited for the game itself to become playable. A long road for sure. Lots of bugs and missed deadlines. Genuine concern over the fate of the project. I never lost faith in the project, because I never lost faith in the man. We have to remember that this is one man's dream. One man's vision. He ultimately will be judged on the success and failure this project. So it with him my faiths and confidences are placed. When it wavers, it will be because there is something in the man that is wavering. I don't think Chris Roberts will waver.

If you would like more information about joining us in the Star Citizen universe BE WARNED:

a) You need a pretty powerful computer to run this game. You'll know if you can run it or not, if you don't know, you probably can't.

b) Use the fleet's referral code: STAR-FXL5-J7SB as it helps the very fleet your joining gain armor, vehicles and weapons. DOWNLOAD GAME HERE.

c) We are not a casual org. We are a hardcore role-playing rank structured organization with departments and focuses. If you are uninterested in referring to people by their rank, or in game character name while playing? This probably wouldn't be the organization to play with it. I mean you should by all means play the game, but we wouldn't be a good fit with us. Due to our size, we don't have much flexibility in this area.

So I was checking twitter and a user by the name of @coffeenmusic sent me this video he made to the song "Omniverse". Not a new song, but this video is. Check it out. He did a great job in my opinion. Maybe he'll do one more for us. Maybe we can arrange a donation jar???

So I want to take this time to thank the wonderful Grand Unified discord server. The conversation has been very respectful and trolls have quickly been called out and removed. The topics range from gaming to science. Music to futurism. Thank you those of you who are active in this community and continue to spread TxI across the globe.

If you are interested in JOINING the GU discord
Click here
Be warned that it is heavily policed.

I'm out of here guys. Next stream will be Sunday. Have a fantastic holiday and I will talk to you guys soon.

Posted by Greydon Square at 9:56 AM