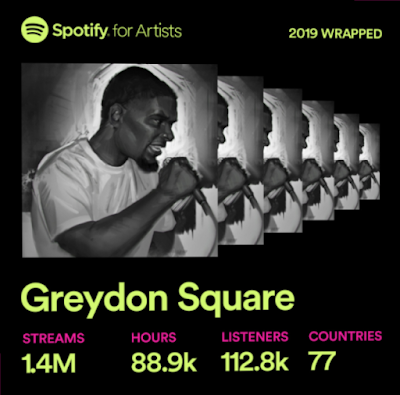 2019
I hear numbers are good. In the age of streaming numbers are everything. This month I took a look at my streaming numbers for last year, and it's pretty interesting what I discovered. Knowing that I have nearly 30k monthly listeners changes how I view myself. How I view my art. How I view success as an independent artist. My critiques will cry: "No one knows who you are!"

That's a lot of Greydon Square. lol. 90K hours? That seems impossible. But so does everything else on this list. My top streaming songs are not what I expected them to be. Let's go through the list shall we...

"Omniverse" is finally getting it's just due. When i first released Type 3, Omniverse was the first song I released as a single. Initially the response was NOT great. I was accused of stringing complex words together with no method or meaning. To see it among my top streamed songs, is actually quite cool.

I didn't expect "Dopamine Notes" to still be getting ht spin it's getting, but that's pretty awesome too. I'm a big fan of Type 2, so the fact that there are those who keep it in rotation makes me smile. It also makes me want to make more music similar to the sound of Mandelbrot Set. 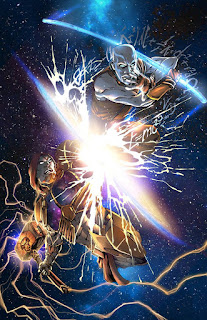 I also think it's interesting that I only have ONE feature song, in that list of top streams. "Broken Symmetry" with myself and Tombstone da Deadman is probably my most popular feature song. Good news to those who are interested in more work coming from Extropy & Entropy, we are finishing up Issue 0 of the E&E comic and that should be out later this year.

I would include other numbers from other sites here, but to be honest, you guys(and gals) get the gist. I just wanted to give a little insight as to who is listening and how much they are. Specifically WHERE in the world people listen. 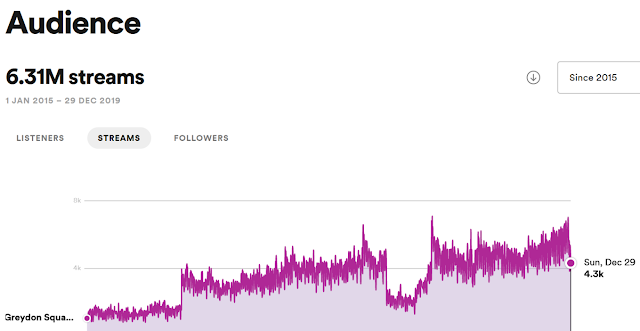 This is insane to look at. 6.31 MILLION streams since JUST 2015??? Someone wake me up! If you would have told me that I would put up numbers like this 14 years ago, I'd have called you a liar. Or at least crazy....lol. Its as if someone gave me my childhood dream as a consolation for the childhood that incubated it. To see it a reality is another thing entirely.

From the ages of 18-35 I'm in. I'd like to think it has something to do with not speaking down to my audience, but who knows. 13% Female over the last 28 days is interesting, but I wish a greater period of time was allowed to be scene. Unfortunately, this is all they gave me.

A new year is upon us. I guess this is a great time to either start over or begin again. That's what I plan on doing. Beginning again. See, I remember this feeling, this hunger, this drive, to prove myself one of the all time greats to ever pick up a microphone. To ever make music. I remember slaving over rhyme schemes, thinking that this would be the bar all emcees would be judged by. Sadly the future had a much more cynical sense of humor. This wasn't all bad though. In pursuing this notion of "great", I was able to better understand my role and place in the producer-consumer dynamic I've been apart of for nearly 15 years now.

A lot has happened in 14 years. Creatively I've achieved most of what I set out to achieve. Intellectually I was able to set myself apart from mainstream hip hop while making sure I could actually make a living going my own way. And make no mistake about it, that is exactly what I did. I went my own way from hip hop. If hip hop wasn't going to be a place open to scientific and philosophical discussions, then i would just create my own community where those of like mind CAN have those conversations. This became Grand Unified. The creative collective spanning countries and continents. Systems and galaxies.

The early days of YouTube and my music career. In this period I was very much heavily referencing my newly discovered atheism as well as coming to terms with some of the things I was apart of serving in the second Iraq war. I would later cover growing up in an abusive foster care system as well as the cultural consequences of questioning the prevailing narrative produced by Christianity and Islam. The Compton Effect and The CPT Theorem were released within 2 years of each other. I was performing all over the country and even different parts of the world. The REASON RALLY took place. I met some of the great thinkers, movers, and shakers in the space. Penn Jillette, Richard Dawkins, Sam Harris, and Ayaan Hirsi Ali to name a few. I also found myself still getting into trouble during this time. I had a couple of run-ins with the law. Dropped out of college. Was on CBC's The National. Dundas Square. Radio Debates. Youtube series. Life was pretty insane during this period.


"What an amazing distance, orphan to artist rappin.
Started off an enlisted, now I’m a Starship Captain" - Far Beyond The Bars

Though I was dealing with a lot of personal(death of a former fiance) and legal issues (fight in DC), my music was making waves. I started making the podcast rounds. Skeptics Guide to the Universe, The Atheist Experience to name a couple. However the damage had essentially already been done. With the incident in DC, I started to notice a chilling effect. No more emails. No more calls. No more invites. It all dwindled down to a couple of appearances here or there but then, nothing.

This became my new focus. My new creative purpose. To share this through my creativity. Through my music. The Kardashev Scale album wasn't originally known as "Type 1". I retconned it so that everyone believes it to be so, but originally it was just called The Kardashev Scale. It wasn't until The Mandelbrot Set album I thought about referring to TKS as "Type 1". This is important, because it sets the creative and structural tone of how the albums would be sequentially released from here on out. Type 2 had to surpass Type 1. So it couldn't be just 1 disc. It had to be 2. And then of course, Omniverse/Aum-niverse HAD to be 3 discs, and HAD to be a numerically symmetrical compliment to type 2.

You can see where we are going with this right? 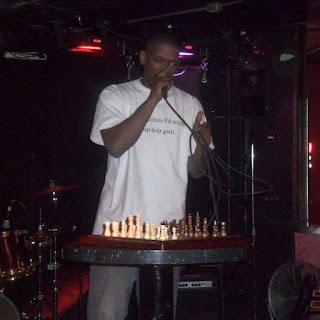 "Nice board, i think I’ll explore it on the knight’s tour,
with a light sword, on my way to type 4" - Star Breaker


How to approach Type 4
If Type 4 was to eclipse Omniverse, there would have to be nearly as many songs on IT, as there had been throughout the entire Kardashev age to date. Nearly. I wont do 70 songs. I wont sit on 70 songs. That's impossible.

There are 64 spaces on a standard regulation 8x8 chessboard.

Type 4 will represent each creatively square on the chessboard. It will traverse the "Knight's Tour".

Each will have 16 songs.

Starting every 3 months 1/4th of the album of that sequence will be released. This will be a seasonal release schedule. 4 songs. Quarterly. For the next 4 years.

This is much more difficult that what I did with Omniverse/Aum-niverse. That was 30 tracks in 3 years.

I will announce a date for the first 4 songs of City on the Type of Forever on my next blog post.

Continuing the conversation
If you're interested in continuing this conversation or have any questions about the new projects, join me live on my youtube channel where I stream daily.


If you're on discord, join me as well as the rest of the Grand Unified Community there as well.


I want to wish everyone a fantastic New Years! I'll probably be back online around New Years eve, but if you're in the discord, I'm not hard to reach.